For quite some time, China was seen as a ‘threat’ by virtue of being a global manufacturing hub, embedding knowledge in production and riding on its cheap labour force and large volumes of foreign investment, to win a disproportionate share of global markets. But more recent declarations from official Western sources focus on the threat stemming either from China’s illegal appropriation or theft of intellectual property, or knowledge for production to move up the value chain, or from China’s misuse of technology (allegedly illustrated by Huawei) for espionage aimed at advancing its increasingly aggressive security interests.

These allegations are founded on one undeniable aspect of China’s manufacturing eco-system: its control by the Chinese state, despite the substantial increase in private ownership of manufacturing equity. But what is inadequately emphasized in this discourse is that, using power centralized in the State, China is managing what was seen in market systems as impossible without “rivalry”—the planned acceleration of research and development, invention and innovation that advances both market and political objectives.

The advance being registered by China in recent years has not been confined to or even concentrated in the traditional sectors. Successes range from artificial intelligence and 5G technology to renewable energy and next generation transportation. This has not been fortuitous. Back in 2015, China had laid out a ten-year plan to attain and even exceed global standards in sectors varying from semi-conductors and electric vehicles to artificial intelligence and digitized civilian and military technologies. The actual drive had begun earlier, and the results seem remarkable. Consider, for example, country/region shares in global value added in high- and medium-high-R&D intensive industries. In 2003, the US held a 38 per cent share, the EU 25 per cent, Japan 12 per cent and China a respectable 6 per cent. By 2018, the picture had changed considerably. The US share had come down to 32 per cent, that of the EU to 19 per cent and of Japan to just 5 per cent. Of the 19 percentage point decline in the combined share of these countries, China had captured 15, taking its share in global value added to 21 per cent (Chart 1). In medium-high R&D industries China’s gain was even larger. The US, EU and Japan saw their combined share in valued added in medium-high R&D sectors fall from 76 to 55 per cent or a similar 19 percentage points between 2003 and 2018, and China was the sole beneficiary with its share rising from 7 per cent to 27 per cent.

This advance on the high tech production front came through a concerted effort to build knowledge for production, rather than rely on import of knowledge incorporated in production through licensing of foreign technologies or attracting foreign investors embedding proprietary technologies in foreign controlled capacities. The key here was a burst in R&D spending. In 2000, figures from the US National Science Foundation show, the US spent 269 billion PPP dollars on domestic R&D, the EU 183 billion, Japan 99 billion and China just 33 billion. By 2017, when the US had increased spending to 549 billion PPP dollars, the EU had ramped up spending to 430 billion and Japan recorded an increase to 171 billion. China, on the other hand, saw its domestic R&D expenditures rising from 33 billion PPP dollars in 2000 to 496 billion PPP dollars in 2017. Relative to the US, China’s spending had increased from just 12 per cent to as much as 90 per cent. The annual compound rate of growth in PPP R&D spending over 2000-2017 was 4.3 per cent in the US, 5.1 per cent in the EU and 3.1 in Japan; in China, it was a remarkable 17.9 per cent (Chart 3). 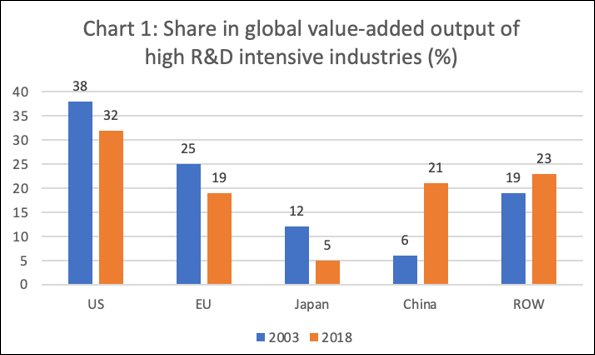 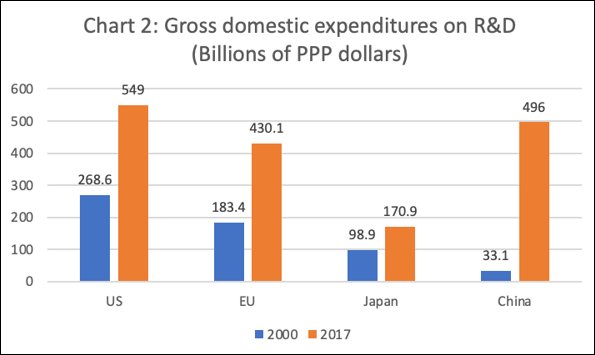 This huge R&D effort on the part of China is likely to make it the hub for global R&D, as opposed to just global manufacturing. In terms of the contribution to the increase in global R&D expenditures over 2000-2017, the US contributed 20 per cent, the EU 17 per cent, South Korea and Japan 10 per cent, whereas China contributed 32 per cent (Chart 4).

Much of this spending is undertaken by state-controlled or state-sponsored organizations, allowing for a more targeted approach to pursuing and realizing inventions and innovations. While it is true that state spending supports a substantial chunk of R&D spending in the US and EU as well, the decisions regarding what to spend that money on are more decentralized. This structure, by encouraging rivalry between individuals, institutions and corporations was supposed to spur invention and innovation. But China’s success in crucial high-tech areas suggests that having a centralized agency identify the areas in which advance may be critical and can be quickly achieved helps. It would be a travesty to argue that this huge, centralized R&D effort on the part of China is essentially geared to illegitimately transferring pre-existing intellectual property. 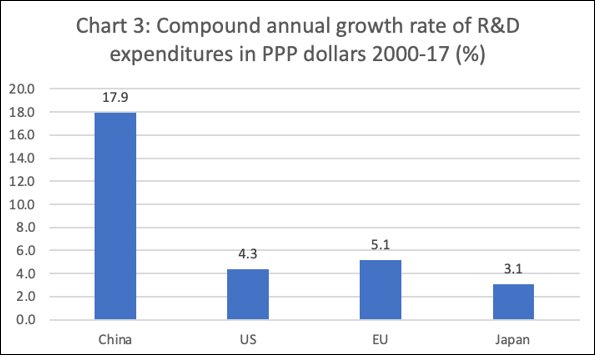 In fact, China has faced and still faces one disadvantage when pushing ahead on the technology front, which is the ability of the US and increasingly also the EU to attract and retain the best talent from across the world. Of the 210,053 foreign recipients of US doctorate degrees in science and engineering fields over 2000-17, the largest number (66,690) were from China. Of the 244,040 foreign graduate students enrolled for science and engineering education over 2016-18, 76,400 were from China, only second to India with 95,950 enrolments.

A feature of the Chinese (and Indian) students is their tendency to stay back in the US after they earn their degrees. In 2017, the recorded 10-year stay rate in the US for those who received their S&E doctorate degrees during 2006-08 and the 5-year stay rate for recipients of S&E doctorates over 2011-13 were both in excess of 70 per cent. This means that, to sustain its R&D drive, Chinese institutions will not only have to nurture local talent but must try and attract talent back to China from locations abroad, especially the US.

That, reportedly, has been part of the planned effort on the R&D front, with results that have supported the transformation of China from a manufacturing hub to an R&D hub, with access to knowledge not just in production but for production. The fear of this challenge posed by China also underlies the current Western aggression against the country based on charges of intellectual property theft and espionage, whatever be the merits of those allegations.

(This article was originally published in the Business Line on April 5, 2021)