CDC Director on reports of clusters of cases associated with daycares and youth sports KMOV. For many, sports were the #1 reason to open the schools. In any case, I suppose that now this sentence — “The occurrence of SARS-CoV-2 infection in schools reflects transmission in the surrounding community” — from CDC’s school re-opening guidance is now inoperative? Who could have known…

The Next Trick: Pulling Coronavirus Out of Thin Air NYT. From March, still germane.

6-month neurological and psychiatric outcomes in 236379 survivors of COVID-19: a retrospective cohort study using electronic health records The Lancet. This is the study that’s being headlined as “brain disease” with inflated figures, because (in my view unfortunately) “neurological and psychiatric outcomes” are combined. Here is a handy chart that separates the two: 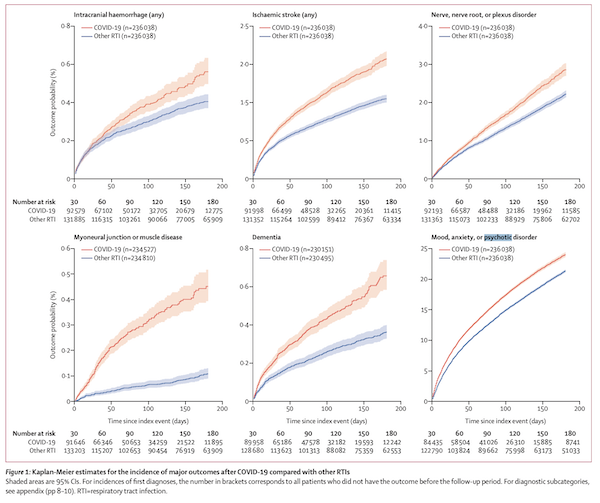 Interim report: Safety and immunogenicity of an inactivated vaccine against SARS-CoV-2 in healthy chilean adults in a phase 3 clinical trial (preprint) medRxiv. CoronaVac. n = 434. From the Interpretation: “Immunization with CoronaVac in a 0-14 schedule in adults of 18 years and older in the Chilean population is safe and induces specific IgG production against the S1-RBD with neutralizing capacity, as well as the activation of T cells secreting IFN-γ, upon recognition of SARS-CoV-2 antigens.” Two doses are needed, however.

China’s Film Authority Orders All Cinemas to Screen Propaganda Films at Least Twice a Week Variety. In this country, we don’t need to be told!

Relations between China and Myanmar have long been fraught, resulting in imperial invasions and wars South China Morning Post

Myanmar’s Junta Has a New Problem. Diplomats Abroad Are Joining the Resistance. Vice. From my armchair at 30,000 feet: Why not occupy an embassy and then set up a government in exile?

“Take if you need, donate if you have extra” campaign has been a popular one all across Myanmar during this hard time in Spring Revolution. Today, it’s held again in #MyitKyiNa, Kachin State to support food and groceries to people. #WhatsHappeningInMyanmar pic.twitter.com/AKV3HZQRvd

Many people more eloquent than me have responded to this tweet, but since I’m a journalist myself + Burmese, female & NOT white, I feel I should point out to Clarissa why some of us have an issue with her trip & respond to this tone-deaf tweet. (THREAD) #WhatsHappeningInMyanmar https://t.co/hZZ13vmnH5

Ward’s deployment of identity politics as a defense is quite striking.

The central question is whether a sprawling archipelago of 17,000 islands and atolls, astride the Pacific and Indian oceans, needs to extract all the carbon trapped for thousands of years in its peaty wetlands. Everything else — from putting more palm oil in biodiesel and setting up fewer coal-fired plants to decongesting the sinking capital city, Jakarta — will emanate from that vision.

Widodo wants to demonstrate that he’s serious about making up for lost time with new regulations expected later this year. The world’s top exporter of thermal coal finally sees the need to put the right price on carbon, tax it properly, and plow resources into a barely tapped reservoir of renewable power. But a low-carbon future is difficult in a resource-rich nation with entrenched business interests.

Is India’s vaccine diplomacy hurting its fight against Covid? Times of India

Iraq: Paramilitaries feeling the heat as Kadhimi steps up moves against them Middle East Eye

China’s Iran Deal Is Just the Beginning The National Interest

Undocumented Venezuelans Given Protected Status In United States NPR (Alex Cox). Swell. More gusanos? (If I have the slang for “reactionary dregs” correct).

NI violence must stop ‘before somebody is killed’ – Coveney RTE

‘Dishonesty’ over Brexit fuelled loyalist anger, says Stormont minister Guardian. And speaking of Brexit, I’m no Brexit maven, so I present this Venn diagram as grist for those who are:

The implications of the latest developments are very stark. Thread.pic.twitter.com/QHzhYWlPsi
1/

Biden Can Go Bigger and Not ‘Pay for It’ the Old Way Stephanie Kelton, NYT (Furzy Mouse).

It’s time we focus on our nation’s caregiving infrastructure — the kind of infrastructure that helps people build a better life and carve out their place in the middle class. pic.twitter.com/B91j2Pj4kQ

By choosing to compete on taxes, we’ve neglected to compete on the skill of our workers and the strength of our infrastructure. It’s a self-defeating competition, and neither President Biden nor I are interested in participating in it anymore.

We want to change the game.

Big if true, since this would halt or even reverse financialization.

Note this line: “There remain hundreds of challenged ballots mostly by the employer that will need to be addressed after the public count.”

Amazon’s been playing dirty and doing their damndest to screw up this election. One organizer described the process to me as “a dogfight.”

It’s great that Kim Kelly is there, but why is Teen Vogue’s labor reporter the only one on the ground? I guess real journalists are too busy sitting with their feet up on their desks, servicing their Washington contacts…

Small businesses versus the platforms The Counterbalance

Take On Wall Street With Local Banking The American Conservative

Sun, sea and cybernauts: the long road for Greece’s digital nomads Reuters. Interestingly, countries seem to be competing on visas for digital nomads.